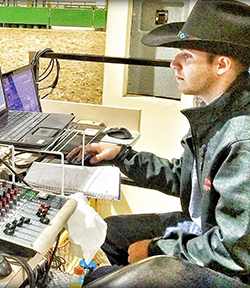 Michael Dwyer, grew up on the rodeo trail with his father, rodeo announcer, Ted Dwyer. He has been involved with rodeos since the age of six, when he started muttin bustin and steer riding.

Since 2015 he has provided sound and music for various events including monster trucks shows and rodeos while working with some of the top entertainers in the sport of rodeo. He was selected as music director for the California Cowboys Pro Rodeo Association State Finals in 2017. Michael provides sound and music for about 30 rodeos, bullriding, monster trucks, destruction derby, and moto cross events each year around the western states. 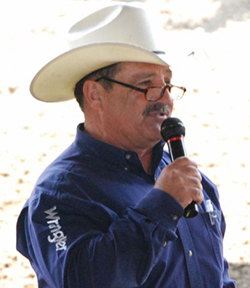 Eddie Kutz, a life member of the Professional Rodeo Cowboys' Association (PRCA) and over a 10-year touring veteran of the bull and bronc-riding circuit, has found a way to achieve his dream of induction into the Cowboy Hall of Fame. He's not going to rope or ride his way in, he's going to talk his way in ... because he not only has the insights that come from years of competition, he has the gift of gab.

It was during his touring the circuit years that Eddie found he had a quick wit and a way with one-liners. He was not all talk, though.

You don't stay on the touring circuit for 10 years "just by flapping your lips," Eddie says. He's proud of having been a competitor, and has the buckles to prove his ability - such as saddle bronc champ at the California Rodeo in Salinas.

Eddie has been announcing rodeos since 1981. He says he started "almost as a whim," but his career has advanced to the point that he logs more than 100 appearances a year at rodeos and monster truck rallies.

Eddie Kutz is a native of Hollister, California. He has spent many years on the PRCA circuit as a performer and announcer and is a Life Member of the PRCA and a member of the Screen Actors Guild. For further information, contact him at (805) 481-6889. 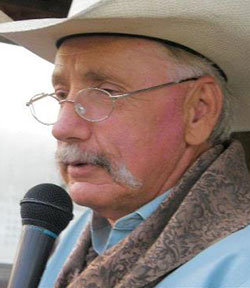 Right from the arena, across the United States, up and down back roads, side roads, dirt roads, to rodeos in one-horse towns to indoor shows.

From getting throwed down, knocked down, mauled around, and just plain hanging around!

In 1974 Ted turned to the baggy pants and the football cleats as a rodeo clown and bullfighter working about 35 shows per year for about 10 years. While working as bullfighter in 1984 at a PRCA rodeo in Hill City Kansas, a bull from the Dorenkamp Rodeo Co. called “Zorro” also know as Frontier Airlines ended that career.

After that injury Ted worked on a few movies series, such as Seven Brides for Seven Brothers, Little House on the Prairie, Father Murphy, Back to the Future III and The Shadow Riders.

Ted’s love for the sport kept him involved, working for the Professional Rodeo Cowboys Association office in Colorado Springs, Colorado in the public relations dept. Then Ted moved back to California where he worked for Cotton Rosser’s Flying U Rodeo Co.

In 1987 Ted got started announcing rodeos and now is announcing about 50 performances per year, for various stock contractors and rodeo committees around the country. Also, about 20 Ice Hockey games per year as well.

Dwyer hopes his work as a rodeo announcer helps give rodeo-goers a feeling for the way the Wild West was, while also blending in an understanding of the difficulties of the modern day cowboy. Dwyer wants people to leave the stands seeing the Cowboy for what he is -- the hero of the rodeo.

The first time Donnie was in a Rodeo arena he was four years old helping his dad do his clown acts. Donnie is a fourth-generation rodeo cowboy. His Dad was a rodeo clown/bullfighter. He also rode bulls and bucking horses.

Donnie Landis has been in the barrel, off and on, for 40 years. "I was lucky. Because of my dad, I learned from the "old school," where a rodeo clown had to do everything - fight bulls, have comedy acts, entertain and save lives."
As far as an Entertainer Donnie Landis is one of the best in the business. His family orientated humor will leave the audience in stitches!  His Vaudeville type stand up walk and talk and timing are the best in the business.